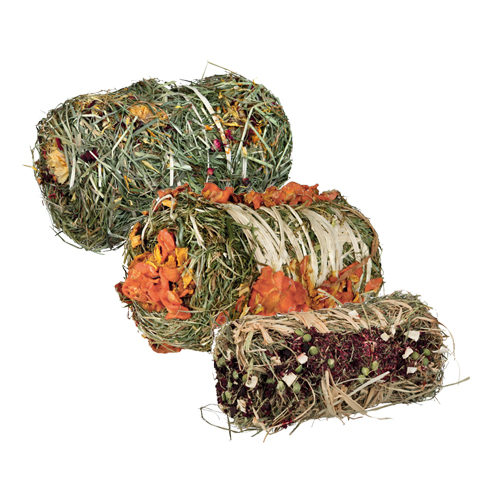 The Trixie Pure Nature Hay Bale is a tasty mix of hay with herbs or vegetables. It is perfect as a snack or as an alternative to hay. The hay bale is suitable for rabbits and small rodents and is available in the varieties flower mix and pumpkin carrot.

Treat your pet to a Trixie hay bale! These hay bales are extra tasty because of the added herbs and vegetables. They are perfect as a snack or an alternative to the regular hay. The hay bale is kept together by a rope made from hemp fibres. The Trixie Hay Bale is suitable for rabbits and small rodents and does not contain any added sugars.

The Trixie Hay Bale is available in two varieties:

One Trixie Hay Bale weighs around 200 grams is approximately 10 x 18 cm in size.

Have you used Trixie Pure Nature Hay Bale before? Let us know what you think about this product.