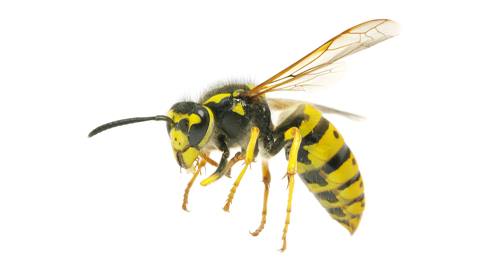 Wasps in August and September

Who doesn’t know someone that is absolutely terrified of wasps? Maybe you are that person yourself. Unfortunately, for those people, we have some bad news: aggressive wasps are approaching!

Normally, August and September are both months that these pesky insects are highly active. Because the United Kingdom has had a summer which had its spurts of hot weather, but not as dry as last year, experts say we should expect more wasp nests the upcoming months.

More wasp nests also means more wasps in general. Another stingy fact (no pun intended) is that the nests will have a lot more grumpy unemployed worker wasps this year. This is due to the fact that larvae are already ‘pupated’ and worker wasps are unable to retrieve their sugary substance. For this reason, they will have to find sugar for themselves and your picnic table has plenty of that!

Are you currently experiencing a wasp plague in your garden? Then a fake wasp nest can the solution to your problems. The Wasp Protector looks like a real wasp nest. With this product, it is possible to mimic a ‘hostile’ wasp nest, which has the same effect as a scarecrow. The wasps will not want to confront this wasp nest and will avoid the area. This way, you can avoid angry wasps in a nature-friendly way! This fake wasp nest is non-toxic and weatherproof.

Unfortunately it is not unavoidable that your dog, or cat for that matter, gets stung by a wasp. After all, dogs and cats are curious and have the tendency to react to sudden movements. Everything that crawls or flies grabs their attention and wasps are included in this category. The most common areas to be stung is the coat and sometimes inside the mouth, throat or nose. Always make sure that the particular area will not swell. If it does, contact your veterinary physician.

Which kind of sting?

There are various different stings. A bee sting is very sharp and will stick onto the skin. However, the bee will eventually die after releasing the sting. A wasp sting is not sharp but can be very painful and when given the opportunity these insects will sting multiple times.

Unfortunately, dogs and cats are stung on the face after they have sniffed around. Especially painful is when a wasp stings on your dog’s nose. Some dogs can even be stung on the tongue or throat if they try to eat the wasp. This can be dangerous as swelling can occur which can press on the throat and block the airways. In this case is it recommended to contact your veterinarian as soon as possible.

Your dog or cat can show allergic reactions when being stung by a wasp. This usually happens because of the chemicals inside the hook or due to a large number of stings. How do you recognise a strong reaction to your pet? Weakness, problems with breath and an enlargement of the swelling. If you notice that your dog or cat has physical complaints then make sure to go to your veterinarian as quickly as possible.

If the wasp sting is present then try to remove it or try to scrape it off. Avoid using a tweezer or other tool, unless it is really necessary. Removing the bee or wasp sting with an additional tool can cause it to release more toxic substances. Use an ice pack wrapped in a towel to mitigate the pain and swelling. To lessen the irritation caused you can use Cane Protecta Dog Lotion or Bach Rescue Cream to soothe the skin.