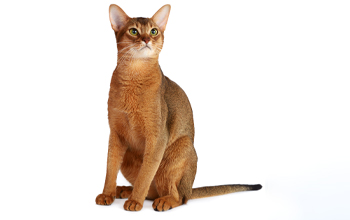 Affectionate, active, playful and balanced: the Abyssinian likes it when his owner is nearby. However, this independent cat also loves to retreat from time to time. The Abyssinian is a medium-sized cat that needs plenty of distraction, exercise and space. The Abyssinian has a predatory, graceful and oriental appearance. The short-haired coat requires little care.

The Abyssinian has a strong independent personality, but is also a very affectionate animal; he has a lot of love for its owner. He is active, curious, outgoing and playful. Abyssinians are gentle and sensitive cats that require a lot of attention. He just doesn't like being alone. The cuddly Abyssinian has a soft meow. He is a real athlete/hunter and needs sufficient exercise and therefore, a lot of space. Abyssinians require little care: brushing once a week is more than enough. During the moult, the coat requires a little more care.

The Abyssinian has an average height and build. The breed is sturdy, agile and muscular. The chest is round and the back slightly arched. It looks like the Abyssinian is walking on the tips of his toes. Its feet are small, oval and compact. The legs are long and straight. This cat breed has a fairly long tail that is wide at the base and gradually thins to the end.

The head of the Abyssinian is wedge-shaped with slightly rounded contours and without flat sides. The nose is medium in length and is characterized by a slight curve at the bridge of the nose. Adult males can have highly developed jaws. The chin is strong and round. Abyssinians have large ears that are wide at the base. The ends are slightly rounded and slightly pointed. The ears are set fairly wide apart and stand up. They are covered with short hair. The ears of the Abyssinian are often marked with a 'wild print': a spot on the back of the ear. Plumes at the ends of the ears are desirable. Abyssinians have large almond-shaped eyes that are accentuated with a line of 'mascara'. The eye itself is circled with a lighter colour. The eyes are far apart. They have a deep and pure colour that can be yellow, green or amber.

Abyssinians have a thick and dense coat that lies smooth against the body. The hairs are short and usually slightly longer on the back. One characteristic of the coat is a hue that resembles that of a rabbit or hare. However, you will not find this pattern on the chest, stomach and inside of the legs.

The weight of the Abyssinian is between 4 and 7.5 kg.