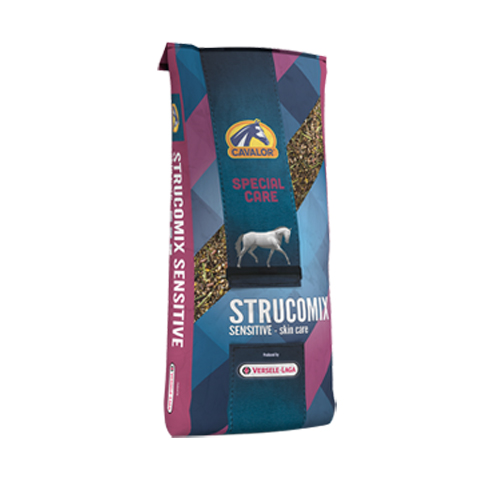 Cavalor Strucomix Sensitive is a specially composed maintenance feed for sensitive horses (or horses with a sensitive skin). The feed ensures that the body is purified and balanced. The purification process has a healing effect on the skin and optimises your horse's digestion.

Cavalor Strucomix Sensitive is a balanced maintenance feed for sensitive horses (or horses with a sensitive skin). This feed mix contains a herb mixture based on nettles, ginger and viola tricolor herbs, and removes toxins from the body faster, purifies the body and re-balances it. The purification process has a healing effect on the skin and optimises your horse's digestion. In addition, the low protein content reduces strain on the liver and prevents excessive heat loss and sweating. Finally, Cavalor Strucomix Sensitive is rich in raw fibre and fat. This combination provides a slow and safe release of energy. Cavalor Strucomix Sensitive can be given in combination with coarse dry hay. Do not combine with silage or young grass!

Always give Cavalor Strucomix Sensitive daily alongside plenty of hay. The daily ration depends on the performance level, breed and roughage ration.

Have you used Cavalor Strucomix Sensitive before? Let us know what you think about this product.