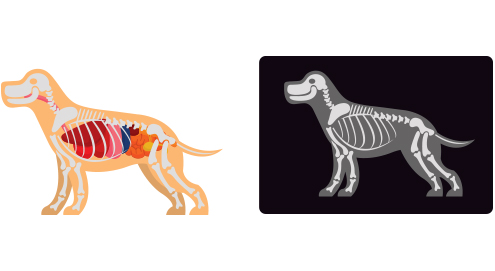 It is important to know the basics of your dog's anatomy, as you can better understand how and why you can take care of your dog in a certain way and how your dog communicates.

The anatomy of mammals

Dogs are mammals. This means that dogs are warm-blooded and give birth to live young (pups) that are suckled by the mother. Bitches produce milk to feed their pups.

Dogs are omnivorous animals. So dogs need both vegetable and animal protein to survive. In nature, dogs and dog-like creatures are predators that hunt in a group.

The construction of a dog skeleton

The skeleton shapes the body and is important to the communication of dogs. Dogs communicate for a large part with body language.

In addition, the skeleton has an important function in the protection of the internal organs, the brain and the spinal cord.

The bones of dogs are similar to those of humans. The strength and build are, of course, different due to the fact that dogs walk on 4 legs and people on 2 legs. The construction is also different because of the specific function of the skeleton, attuned to the needs of predators. The strength in the legs and the strength in the jaws is very different. Also, the teeth are constructed differently and suitable for a predator with sharp canines. The chewing muscles are also tuned to this.

Your dog's tail has a function in balance but also plays an important role in communication.

Unlike humans, in dogs the shoulder joint is not a ball joint but a hinge joint. Dogs do not have collarbones either. The shoulder blades of dogs are not directly attached to the rest of the body, instead, they are connected with muscles and tendons.

Dogs have similar organs and senses to humans. These are of course adapted to the your dog's lifestyle Their sense of smell and hearing are much better developed than in humans.

The different organs and senses are briefly discussed below.

Like humans, dogs have different organ systems. The following are discussed:

The skin is the largest organ of the body. The main function of the skin is to protect the body. Protect against infections, but also physical injury, loss of moisture and loss of heat. In dogs, the skin is in most cases still covered with hair. These hairs regulate body temperature. It keeps the dog warm, but in warm weather the coat also provides cooling. Therefore it is often not responsible to groom your dog in the summer (unless this is necessary from a veterinary point of view). The hairs also play a role in communication. When threatened, the hairs can stand upright and the dog seems larger.

In comparison to humans, dogs walk on their toes. For this purpose, the legs are provided with pads, paw pads that are thicker than on other parts of the body.

Most dogs have whiskers too. These hairs are different, being longer and thicker, than the hairs on the body. They are very sensitive when touched.

The airways are important for the oxygen supply of the body. Air enters the body through the nose (or mouth) and goes through the trachea, bronchi and bronchioli to the lung vesicles. During this route, the air is filtered and heated. In the lungs, the oxygen is removed from the air and carbon dioxide is released back into the air, which is then exhaled.

Heart and blood vessels, also called the cardiovascular system, consist of the heart, all veins and arteries and all smaller blood vessels. These organs maintain blood circulation and take care of the transport of oxygen, nutrients, blood cells, waste products, etc. Blood also has a function in thermoregulation.

The gastrointestinal tract plays a role in food intake. This is where the digestion takes place so that nutrients can be absorbed. The intestines also play an important role in the immune system.

The kidneys and urinary tract (ureters, bladder and urethra) play an important role in the water and salt management of the body. Waste products are also excreted through the kidneys. The smell of urine in dogs also plays a role in communication between dogs.

Like humans, males have two testicles, prostate and a penis. Female dogs have 2 ovaries and a uterus. Females in heat on average 1-2 times a year. During heat, the fertile period takes place. More information about the heat, mating and pregnancy of the bitch can be read in the article dog pregnancy.

The hormone system consists of several glands in the body. These include the thyroid, pancreas, adrenal glands, ovaries and testicles. These glands are controlled from the hypothalamus and pituitary gland in the brain.

Dogs, like humans, have different senses that they use to live and survive. To be discussed:

For dogs, the smell is very important. The sense of smell is more developed in dogs than in humans. Dogs use their sense of smell to recognise other animals and to communicate with other dogs.

Dogs can hear sounds in a different frequency than humans. They can still perceive sounds from 60,000 to 100,000 Hertz. So dogs can hear ultrasonic sounds that people cannot. Dogs are less able to perceive lower tones. In addition to a wide range of hearing, dogs can also locate sounds well. Especially dogs with upright ears can rotate the auricles in the direction of the sound in order to better pick up the sounds.

Dogs have tactile sensing hairs near the lips (whiskers), eyebrows, ears and forelegs. These help dogs to orientate themselves well, even in the dark. Some breeds of dogs only have their hairs on their lips and eyebrows. Also, the tongue, rhinarium, lips and soles of the feet are important for their tactile sense.

Dogs have a wider range of vision than we humans because of the lateral implantation of the eyes. Some breeds are bred in such a way that the eyes are more on the front. This makes the field of vision smaller again. Dogs see limited colour. At night dogs have better vision than humans. Dogs can distinguish moving objects better than stationary objects.

The taste of a dog is well developed. Dogs love other tastes than humans. Dogs often have a preference for sweet flavours.