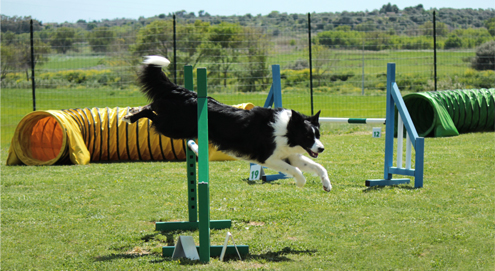 Your faithful companion, a loyal friend to go on walks with, guard the house or land; people have dogs for various reasons. But there's more! Is there anything better than having fun with your dog? Playing with your dog is good for both humans and animals, and a very positive think for the relationship between owner and dog. It contributes to a good physical and mental health, which may prevent behavioural problems.

These days, there is an endless number of clubs and associations offering all kinds of activities. Something fun can be found for every combination. The possibilities are endless, but make sure you choose something that suits you and your dog! In this article, we will discuss a number of activities in more depths!

This discipline is widely practised. It is a relatively calm form of dog sport, in which all kinds of exercises are taught, which must be carried out by the dog on command. These include passive exercises such as sit, stand, down and heel, but also many active exercises, such as follow, fetch (with direction), guiding the dog to a spot and scent work. Learning can be done in many different ways, such as with a clicker. Obedience courses and competitions exist on various levels.

Agility is a popular and active sport. A course is set out with all sorts of obstacles, such as jumps, tunnels, slalom and see-saw. The owner (the handler) actively accompanies the dog and gives instructions. The aim is for the dog to finish the entire course without mistakes in the fastest possible time. This is a real challenge for your dog! You can train your dog's fitness and condition by using balance discs, paw pods or inflatable doughnuts and peanuts designed by FitPAWS. A new variant of this is Hoopers. This also requires the dog to complete a course, but it is not a physically demanding as agility. The obstacles consist of hoops, fences, tunnels and barrels. The dog doesn't need to jump, making it suitable for older dogs, or younger dogs that are prone to injury. Another difference with agility training is that in hoopers the handler stands in a specific spot and gives instructions from there. The owner does not accompany the dog. This makes the sport suitable for people with a physical impairment.

Flyball is a highly active form of dog sport. Four dogs form a relay team and compete against another team. Each dog has to get to the Flyball machine as quickly as possible, over four low hurdles. When the dog presses a pedal with his paw, the machine shoots out a ball. The dog must catch this and return to the starting point with the ball as quickly as possible, so that the next dog can start.

For athletic dogs and owners, Canicross is a highly suitable sport, as it involves running together! It is not very well known yet, but is increasing in popularity. In Canicross, the dog wears a special harness that is attached around its owner's waist using an elastic belt. The length of the course varies. The dog usually runs a little way in front of its owner and can pull (on command). A variant to this is Bikejoring. This has the owner cycling on a customised mountain bike.

Greyhounds are made for speed! These dogs traditionally hunt by sight. They can race on a special track (so-called track racing) or on a rough field (coursing). The dogs are trained to chase a (fake) hare. The animals are divided into various classes, where only dogs of the same breed and the same sex race against each other. Some greyhounds can reach a speed of about 60-70 kilometres per hour!

Scent work is a special branch of sports, often practised by hunting and working dogs because of their instinct. Recreational scent work is becoming increasingly popular, as all dogs like to use their noses! This is a real mental challenge for your dog!

Within this discipline, the possibilities are endless! Enjoying the outdoors with your dog for a tough mental and physical challenge. Sometimes, hunting dogs are specifically bred for a certain component, but there are also more all-round hunting dogs. All kinds of competitions are held on various levels, containing some of the following elements (depending on breed): hunting on foot, fetching on land and/or water, hunting where dogs chase game and hunting where dogs follow a scent (sweat) trail. The latter involves dogs following the blood trail of shot or injured game. In hunting, "sweat" is also used to indicate blood.

Within this discipline, we mainly see Border Collies! Herding is in their blood and is a pleasant pastime for both owner and dog. Both sheep and runner ducks can be used. These animals can be moved by the dogs as a group, but also be separated according to all kinds of exercises.

Dogs participating in sled dog racing mainly include Siberian Huskies, Samoyeds, Alaskan Malamutes and Greenland dogs. A cart can also be used instead of a sled. There are various competition categories, in which the distance to be covered varies from 4 to dozens of kilometres!

As you can see, there is a suitable activity for every dog and its owner! For more information, go to a dog club or association in your area.

Vetsend has a number of training aids for you. In the training category and the dog sports category, you will find products such as Pawise Clicker, Trixie Target Stick, puzzles by Nina Ottosson and various training treats for dogs.

Due to the new Brexit measures, we're currently unable to ship orders to our customers in the United Kingdom. We're working hard on a solution, so you can once again order your favourite products. We thank you in advance for your patience and understanding.