Epilepsy in dogs and cats 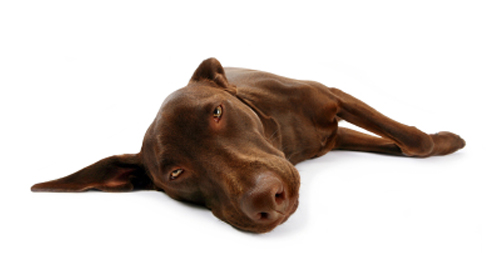 Epilepsy is when your pet experiences a loss of consciousness and cramped legs at regular or irregular intervals. The seizures can vary in strength, duration and form (for example, many shocks or just stiffening).

How does an epileptic seizure occur?

Electrical signals run between brain cells and cells of the rest of the nervous system. During a seizure, there is a short-term overpowered electrical signal that is not slowed down by other cells.

If the electrical conduction disturbance spreads throughout the brain, we call it a classic complete seizure. Cramps occur, the legs can stiffen, the animal drools or foams a lot and often lets urine and/or stool run out. Often there is also loss of consciousness in this situation. The animal is not approachable.

Epilepsy can also occur in a limited part of the brain. The symptoms of these so-called partial epileptic seizures can be: flapping the lower jaw, pulling with one or more legs or 'tail chasing'. The animal remains conscious.

How does an epileptic seizure proceed?

Seizures can be very variable, but often proceed in 3 steps:

You can sometimes witness certain symptoms that can lead up to a seizure. The animal behaves differently than normal; restless, clingy, drooling, panting or having a different look in the eye. This period can last a few seconds, but sometimes also a few days.

The seizure almost always consists of a period of loss of consciousness. The animal often falls over and the whole body stiffens due to the cramping of all muscles. Subsequently, cramping attacks can occur in which the animal makes a kind of ‘riding a bicycle’ movement. The animal may urinate and release stool and drool violently or foam at the mouth. After a few minutes, the animal regains consciousness.

3. The period after the seizure

Most animals are upset for a while after an epileptic stroke. Sometimes they are thirsty or hungry. Sometimes the animal goes to sleep because they are very tired from the attack. Other animals get very restless.

The phase after the seizure can be very short (seconds or minutes) but can also last a few days or sometimes weeks.

The occurrence of electrical signals that are too strong can have various causes. The problem can be in the brain itself, but this doesn’t always have to be the case.

We speak of primary epilepsy when no identifiable cause can be found for the seizures; the seizure usually occur when your pet is resting and often the first stroke is seen in the early morning. The age of dogs with primary epilepsy is between 6 months and 5 years. It is not easy to indicate an age category for cats.

In secondary epilepsy, the cause can lie in the brain itself, but also outside it (for example, a liver function disorder, low blood sugar, oxygen deficiency, abnormalities in the pancreas).

It is important to keep a diary during the first period of treatment. The date, time, duration and severity of the seizures can be recorded here. Further details, such as behavioural changes, response to environmental stimuli and changes in eating and drinking behaviour and stamina level can also be tracked. In addition, you can make a video recording of a seizure, as this can provide your vet with extra information.

In many cases, treatment is not immediately initiated after the first epileptic stroke. If seizures occur more often, treatment is usually instituted. Setting the correct dosage of anti-seizure drugs can take a while. You often see side effects in the first period (for example, becoming very lethargic).

When do you notify the vet?

Do you have a question about this topic? Please send an email to: veterinarian@vetsend.co.uk

Vetsend uses cookies which enables us to help you in a better and more personal way. These cookies allow us and external parties to follow your internet behaviour. Furthermore, this enables us to show you personalised advertisements, a better functioning website and creates the opportunity for you to share information on social media. By clicking accept, you agree to this. Read more
Accept Deny