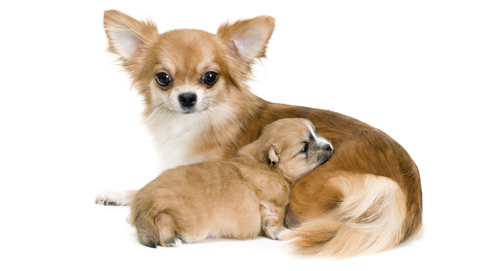 A bitch will come into heat an average of twice per year. On average, your dog will be in heat for about 3 weeks. This will be marked by vaginal discharge and swelling of the vulva. Generally speaking, a bitch will be fertile around the 10th day of being in heat. However, the duration of the heat and the point of fertility can vary greatly for every dog.

When is my bitch fertile – determining Progesterone

While early on in heat, the bitch will reject the male dog when it tries to mate with her, around the point of fertility she will allow the male dog to mate with her. It is important to create a calm environment around the time of mating, so that the bitch and the male dog can get to know each other at their own pace, and mating can then take place. For mating to be successful, the male dog and the bitch will be "coupled" for a little while. They will then stay coupled for a few minutes due to the swelling around the genitals. Successful mating doesn't always mean that the bitch becomes pregnant. This depends on the timing of mating and the quality of the sperm is also crucial.

Duration of pregnancy and examination by veterinarian

Unfortunately, there is no blood or urine test available to determine whether a bitch is pregnant, like in humans. There are a number of other ways to confirm the pregnancy.

In principle, the bitch does not need any extra nutrition in the first 5 weeks of pregnancy. From week 6, the puppies will grow a lot, and this growth requires extra nutrients. At that point, it is a good idea to move to a puppy food that is also suitable for pregnant and lactating bitches such as Royal Canin VCN – Pediatric Starter Small Dog, Medium Dog or Large Dog & Specific Puppy All Breeds CPW & Specific Puppy Small Breed or Medium breed.

At this point, the mother can be given 10-15% more food each week until the birth of the puppies. This means that at the end of the pregnancy the mother is given around 40-60% more food than usual. At the end of the pregnancy, the stomach is so full that the stomach comes under some pressure. At this point, the bitch is unable to eat large amounts of food. We therefore recommend that you offer your dog frequent small portions.

It is important to prepare for your dog giving birth. In any case, the bitch will need a quiet, sheltered and draught-free place to give birth and care for her puppies. It's a good idea to buy or make a whelping box, preferably with a raised edge that is low enough for the bitch to step over but high enough that the puppies cannot climb over. Make sure that the whelping box is in your house a few weeks before the birth of the puppies, so your dog can get used to it. You can place a vetbed into the whelping box and maybe some pads. The ideal temperature for the puppies in the whelping box is 24-27 degrees. It is a good idea to have a heat lamp in the house that can be used to give the puppies some extra warmth if needed.

If you are expecting a large litter, there is a chance that the bitch will not have enough milk for all of the puppies. If this is the case, you can keep some formula in the house just in case, such as Royal Canin Babydog Milk Puppy Milk or Vetoquinol Care Milkodog. If one of the puppies appears to grow too slowly, you can start supplementing their nutrition straight away. You should also have a stack of old towels at hand to rub the puppies dry after birth if necessary. The mother will often do this herself, but you should be prepared to help if you need to. We would also recommend having mucous aspirators available to suck out any mucous after birth if necessary. The birth of puppies can be quite a tense time and you need experience to make sure it goes well. For example, if you know a breeder who has experienced the birth of puppies before, they will be able to advise you or be with you when your dog goes into labour.

Signs of the onset of labour

The end of pregnancy is in sight and labour draws nearer. When do I know that my dog is getting ready to give birth? On average, bitches will give birth around day 63 of pregnancy. A few days before labour, your dog will get a little restless and start nesting. The milk production will gradually start, making the milk glands swell up even further. A temperature dip can also be a sign of the onset of labour. We would therefore recommend that you check your dog's temperature 3 times daily from day 56 onwards. This gives you an insight into the dog's normal range of temperatures during the day. 12 to 24 hours before the start of labour, the dog's temperature will fall by 0.5-1.5 degrees. This is not as clear in all bitches, but if you do measure a clear difference in temperature, labour should start within 12 to 24 hours. On the day of the birth, bitches often have little to no appetite, and they can also urinate more frequently and lick their bottom more frequently.

The whelping box is a lovely place for bitches to give birth. However, if your dog chooses a different place, the best thing to do is to leave her be. Calmness is very important in this phase. Right before pushing the puppies out, there may be some red discharge.

If the birth is taking a little longer, the bitch will sometimes rest in between, so that she can regain some energy and sleep for a while. As soon as the pushing starts again, the next puppy should be born within 30 minutes. Is it taking too long or are you not sure whether labour is progressing? Please contact your veterinarian.

Normally, the bitch will bite through the membrane surrounding the puppy when it is born and start to lick the puppy clean. If your dog does not do this, you can help her by rubbing the puppy dry with a towel. If the bitch is having puppies for the first time, keep a close eye on how she responds to the puppies. Some dogs can find the swarm of puppies a little scary at first.